WTF Taekwondo has achieved the Olympic status which has not been easy, many other Martial Arts are easy to criticize the fact because of the obvious.
But the amazing abilities of these Athletes in fitness, kicking techniques and style cannot be  matched. Athletes train very hard to reach the World class level and of course there speed and strength can  be used for Ultimate self defense.
We are the only Taekwondo club in Canterbury that is a member of the official national governing body for Olympic Taekwondo, British Taekwondo & The World Taekwondo Federation. 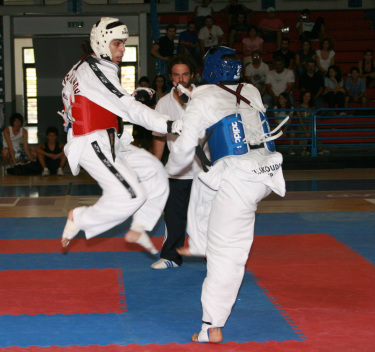 The duration of each round may be adjusted to 1 minute x 3 rounds, 1 minute 30 seconds x 3 rounds or 2 minutes 2 x 2 rounds upon the decision of the Technical Delegate for the pertinent Championships.

1.1 Body: The blue of red colored area of the body protector
1.2 Head: The area above the collarbone (i.e. whole part of the head including both ears and the back of the head)

3. The valid points are divided as following:

4. Match score shall be the sum of points of the three rounds.

5. Invalidation of points:
When a contestant performs a scoring attack that incorporated the use of prohibited acts, the points scored shall be annulled.

Scoring and Publication1. Valid points shall be immediately recorded and publicized.

2. In case of non-use of the Protector and Scoring system,
valid points shall be recorded by each judge by using the electronic scoring instrument of judge's scoring sheet. Points recorded by judge's instrument shall be immediately publicized.

3. In the use of the Protector and Scoring Systems: